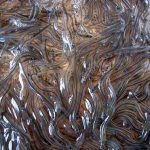 Juveniles inhabit rivers, streams, lake ponds, estuaries and coastal lagoons. They live on the bottom, under stones, in the mud or in crevices. Is an individualist in all its stages. The schools of elvers and young eels which are observed from time to time in estuaries and rivers are a mass response to outward conditions and not of active assembling. As eggs in mid-waters of Sargasso Sea, as leptocephali in North Atlantic surface waters, as glass eels in estuaries and brackish lagoons and later, from elvers to the downstream spawning migration, in streams, ponds and lakes. The downstream spawning migration, usually from late spring to winter, is largely confined to moonless or dark nights and usually in flood water after heavy rain. Very little is known on their oceanic migration; once enter the ocean their migration routes to spawning grounds are not unequivocally known.

Atlantic Ocean: Atlantic coast from Scandinavia to Morocco and rivers of North Atlantic, Baltic and Mediterranean seas. Spawning area in western Atlantic (Sargasso Sea). Also distributed along the coast of Europe from the Black Sea to the White Sea.