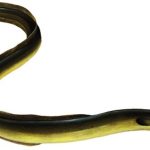 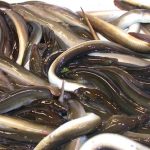 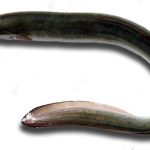 Inhabits all types of Benthic zone (waterfloor level) habitats from streams to shores of large rivers and lakes. Naturally found only in water bodies connected to sea. Migrates to the depths of the Sargasso Sea to spawn. Spawning takes place in late winter and spring in the Sargasso Sea. Spawning area is reported to be about 2000 km wide. The larvae are brought to the coasts of Europe by the Gulf Stream in 7 to 11 months time and can last for up to 3 years. They are transformed into elvers (small eels), enter the estuaries and colonize the continental waters. Young eels spend their growing period in freshwater, males for 6-12 years, females for 9-20 years, before ending their metamorphosis. At the end of their growth period, they become sexually mature and the eels migrate to the sea where they inhabit deep waters. Is an individualist in all its stages. The ‘schools’ of elvers and young eels which are observed from time to time in estuaries and rivers are a mass response to outward conditions and not of active assembling. Its food includes virtually the whole aquatic fauna (freshwater as well as marine) occurring in the eel’s area. At an age of 6-30 years, eels begin to undergo a remarkable series of changes, eyes are enlarged, head becomes pointed, skin on the back darker, while that on the belly becomes shiny and silvery. Utilized fresh, dried or salted, smoked and frozen; can be fried, boiled and baked. Obvious decreasing of the stocks for all the continental native distribution area.They live on the bottom, under stones, in the mud or in crevices. Their high fat content and Benthic zone (waterfloor level) feeding habits in continental waters make them vulnerable to the bioaccumulation of pollutants, such as heavy metals and organic contaminants. The European eel population as a whole has declined in most areas, the stock outside safe biological limits and current fisheries unsustainable.

Atlantic Ocean: Atlantic coast from Scandinavia to Morocco and rivers of North Atlantic, Baltic and Mediterranean seas. Continuous introductions to Asia and South and Central America, but not reproducing. Spawning area in western Atlantic (Sargasso Sea). Also distributed along the coast of Europe from the Black Sea to the White Sea. 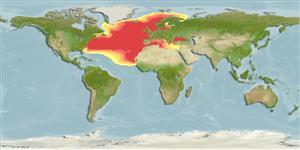