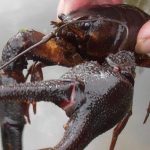 Nocturnal and feeds on worms, aquatic insects, molluscs and plants, spending the day resting in a burrow.

Restricted to fresh water, living only in unpolluted streams, rivers and lakes. It is found from France throughout Central Europe, to the Balkan peninsula, and north as far as parts of the British Isles, Scandinavia, and the western parts of the former Soviet Union.