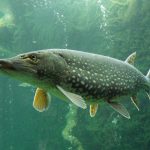 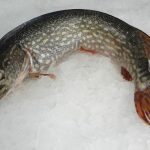 Occurs in clear vegetated lakes, quiet pools and backwaters of creeks and small to large rivers. Usually solitary and highly territorial. Enters brackish water in the Baltic. Adults feed mainly on fishes, but at times feed heavily on frogs and crayfish. Cannibalism is common. In arctic lakes, it is sometimes the only species present in a given water body. Does not generally undertake long migrations, but a few may move considerable distances. This fish can be heavily infested with parasites, including the broad tapeworm which, if not killed by thorough cooking, can infect human. Excellent food fish; utilized fresh and frozen; eaten pan-fried, broiled, and baked. Valuable game fish. In spite of numerous attempts to culture this species, it was never entirely domesticated and does not accept artificial food.