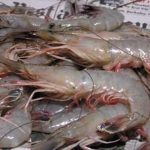 Postlarval shrimp move inshore to nursery areas in estuaries beginning in April and early May. In the South Atlantic, these areas are generally dominated by the marsh grass Spartina alterniflora. Smaller pink shrimp remain in the estuary during winter. They bury themselves deeply in the substrate when cold weather comes and are somewhat protected from winter mortalities. Shrimp that survive the winter grow rapidly in late winter and early spring before migrating to the ocean. Pink shrimp are commonly found on hard sand and calcareous shell bottom.

Pink shrimp are found worldwide in tropical and temperate waters. Off the United States, they occur from southern Chesapeake Bay to the Florida Keys, and around the coast of the Gulf of Mexico to Yucatan south of Cabo Catoche. They are most abundant off southwestern Florida and the southeastern Golfo de Campeche. 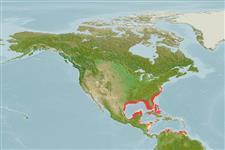